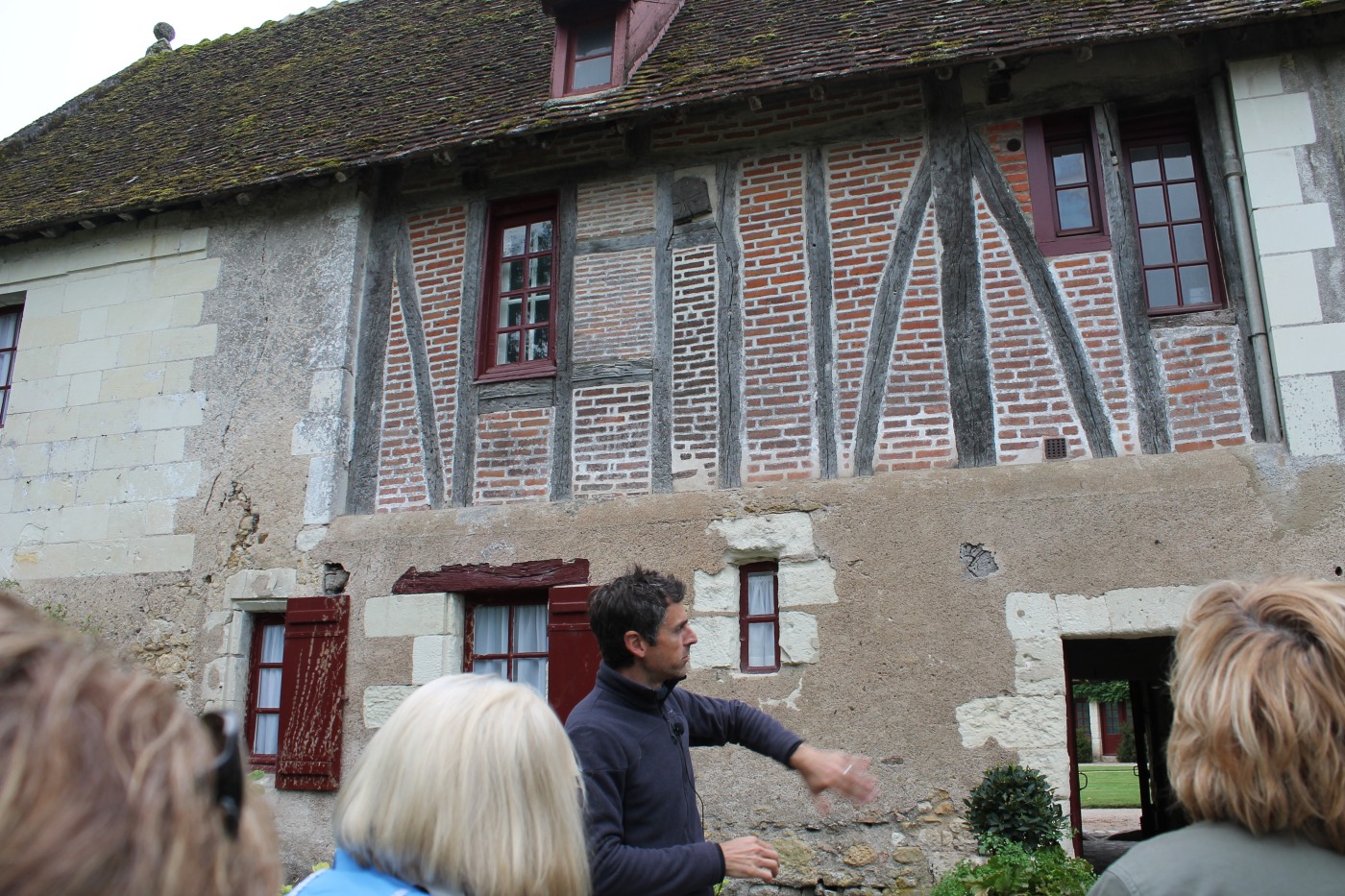 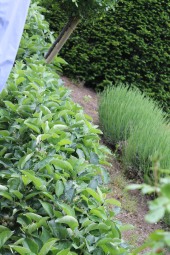 How does a man whose family hails from Minnesota and who worked fifteen years at the renowned Longwood Gardens in Philadelphia, Pennsylvania, as a horticulturist end up in the rural French countryside?

Need I even ask…you may have guessed it! Love of course. Nicholas Tomlan  married a French girl, and after residing together in the states for several years, they migrated to France, and certainly the gain of the Chateau de Chenonceau Gardens was a loss to Longwood Gardens.

The scheduled National Association of County Agricultural Agents (NACAA) visit to Chateau of Chenonceau in the Loire Valley was an experience for the senses!

(Background:King Henri II in 1499 had a lovely politically astute mistress named Diana of Poitiers. Henri was married to Catherine de Medici, but his heart appeared to be that of Diana’s. Purchasing the beautiful chateau at the edge of the Cher River near the significant Loire River, a place of beauty enveloped the area. With inferences from Versailles and Italian gardens, the breathtaking Gardens of Chenonceau emerged as a more delicate and feminine garden. When Henri was killed in a sporting accident in Paris, his widow, Catherine de Medici moved into Diana’s chateau and presented Diana with Chateau du Chaumont. Later during the Enlightenment, the Chenonceau was a place of study and reflection.) 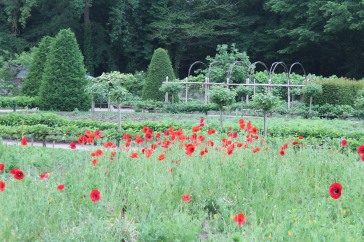 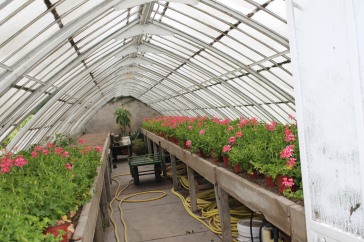 Nicholas as known by his French persona, shifted mental focus as he seamlessly moved from French to English and back again. Quickly however, he picked up his United States vernacular and seemed to enjoy interpreting gardening and horticulture practices among cultures.

With seven staff members and two animal care-takers, Nicholas works with the Menier family whose family has owned the estate since 1913. They consult on garden design, and Nicholas supervises the gardening staff and furnishes food items for the restaurant and works in conjunction with the florists, who look for foliage, flowers and fruits from the garden for their numerous arrangements. Nick asked our group to look for the outstanding arrangements as we meandered about the chateau. There are three full-time floral arrangers and an apprentice to prepare the arrangements, and sure enough, Nicholas was correct when he said the arrangements throughout the Chateau were spectacular.

Nicholas explained that at Longwood Gardens they had around 900 volunteers while none are utilized at Chenonceau. The French just have a different mindset on the subject of volunteers, feeling perhaps that volunteers take the place of employees.

A thorough walk around the gardens and facilities showed two greenhouses and many beds. Each bed had a schedule for the year which in some cases, could be sorted with the seed companies. Beautiful chestnut weavings created a look of the Medieval era along some borders. Nicholas explained that he had learned the weaving technique at a French workshop. He suggested that those interested in the weaving, look for a YouTube video. I’m sure you’ll find it on YouTube.

Immediately upon entering through the sculptured gardens all spied the intriguing hedge. Nick said the hedge was apple trees  and explained that apple trees were used throughout the chateau and in France. The full-sized apple trees were pruned, directed and interwoven. They were full-sized apple trees and date back to the 1700s as a technique. Again he said there were an abundance of lecturettes if we wished to learn the subject. Also an Evergreen oak in the area was spectacular. Sites were everywhere to behold…the hand of Buddha citrus plant (Citrus medica), cardoons (Cynara cardunculus) that looked like artichokes, and all nature of flower. Nicholas explained that almost no mulch was used in France–a very different approach although Americans mulch too much. His beds had been manured for years so he was giving them a break for the soil to settle a bit. 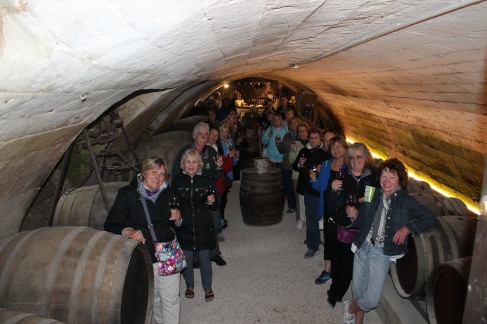 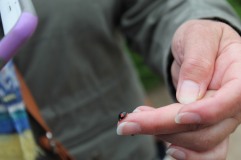 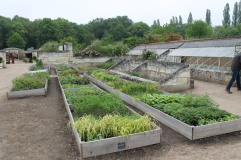 The Podoget (or French Soup) garden included kales, dandelions, mustards and other herbs. The chef preferred these to heads of lettuce along with cosmos, pansies, chrysanthemums, borege, and chives.

With two large fields of tulips missed by the group by just a few days, spring plantings are after May.

The Menier family cherishes the chateau and are well known; they were philanthropic during World War II, and allowed an entire floor of the chateau to be utilized as a make-shift hospital for patients–some 2000 soldiers. They helped a great deal with the resistance when France was occupied by Germany during World War II. The Loire River was the demarcation line so many crossed to freedom near the chateau itself.

One will easily see the different houses of wine in its taste as the soil around the chateau is high in limestone and flint,  said Nicholas, as he mentioned we should partake of a wine tasting of Clenonceau’s wines.

Nicholas also shared some of the citrus trees and the former orangery. He said the location is referred to as a lemonery in Italy. Recently he had taken a root scratching course at Versailles for the care of citrus. The fruit dates back to the Renaissance and the preparation is quite unique. The old recipes of confits are quite tasty, said Nicholas.

As for France, one cannot come here without seeing poppies It comes from a sixteenth century word. When I was living in the US, I enjoyed seeing the poppies when I visited. Quite spectacular!

Nick was excited to share a project he was working on. Mrs. Menier came across some old landscape design drawings from Russell Page buried among old documents. They date back to 1954. Check out “The Encyclopedia of a Gardener” by Page. For a space that had previously been a child’s play-yard, we were challenged to bring the Russell Page drawings to life. What an opportunity and we are nearly finished. It opens on June 1!

Nicholas told us about the swan who just seemed to not like the Director of Gardening, Nicholas 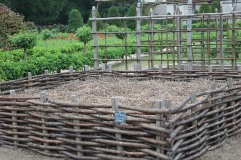 When Nick learned our group had visited Varengeville and enjoyed a tour by Clair Bonehayer a few days earlier, he explained that the Chenonceau gardens used mixed gardens with Italian and French influences, differing from the gardens designed by Gertrude Jeckyll at Varengeville.

Nick explained that Russell Page used things that already existed in nature so visually it did not conflict. A Karl Gercens photograph would be replicated for style in the design. 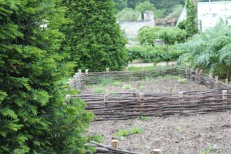 In Versailles and elsewhere some shifts of function existed for orangeries. He said in the future we should visit Rueon and La Jardin Plum where Joan of Arc met her fate…another example of French gardening.’